The Eurovision Song Contest has truly captured the hearts of Australians over the years. And it seems the feeling is mutual considering the contest’s invitation for Australia to compete for the past three years, despite its non-European status. With Jamala’s spectacular win in 2016 came the privilege of Ukraine hosting the 2017 finals in Kyiv. And what better opportunity for the Association of Ukrainians in Victoria (AUV) to keep the renowned Ukrainian hospitality going, and throw its own spectacular celebration in the heart of Australia’s cultural capital. 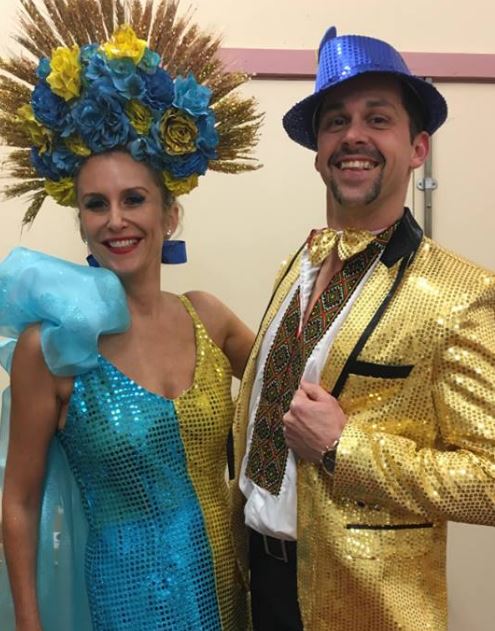 Close to 150 guests from 17 to 70 were greeted by dynamic hosts Ksenia Karpaty (Liana Slipetsky) and Petro Dnipro (Alex Dechnicz), who made an unforgettable glitter-laden entry to Verka Serduchka’s 2007 Eurovision hit Lasha Tumbai. The audience was treated to a program of past Eurovision videos, the premiere screening of Wild Dances – a Eurovision-inspired short film by Sydney filmmaker Bina Bhattacharya with members of the NSW Association of Ukrainians amongst the cast, a ‘best costume’ competition, a surprise revival of Ruslana’s 2005 Wild Dances routine by a talented group of young dancers from the Melbourne-Ukrainian community, and over three hours of non-stop DJ/VJ disco dancing including an obligatory ‘kolomeyka’.

The party reluctantly wound up well after its 1am finish time to make way for the following day’s wrestling event booking. Reality bites.

Aside from being a wild social success, the event ran a profit for the AUV – no mean feat for any community group. A raffle with prizes donated by Irene Stawiski, Lydia Gibala and Andrew Kobas generated further much-needed funds for the AUV. But the event achieved much more than this. It was organised by an enormous group of volunteers from across the spectrum of the Ukrainian community. From the DJs to the decorators, the techs to the ticket sellers, the dancers, bar staff and kitchen helpers – it was a truly collaborative event that has breathed new life into our community spirit. Two new members joined the AUV on the spot.

Feedback from guests has been overwhelmingly positive with one guest reporting that it had been the best party at the hall in many years.

The AUV would like to thank each and every person who contributed their time and effort to bring this event to life, and hopes they are proud of their contribution to their community.