The Association of Ukrainians in Victoria (AUV) presents an exclusive night of Ukrainian documentaries for one night only.

After successful screenings at Tribeca Film Festival in New York and Sydney Film Festival, the AACTA award nominated ‘War Mothers: Unbreakable’ will have its Victorian premiere on October 12th at the Ukrainian Hall in Essendon. A portion of each ticket sale will go to the war volunteers in Ukraine. 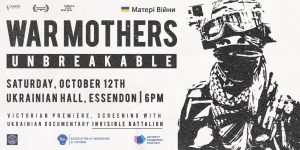 War Mothers Unbreakable
When the war came to Ukraine in 2014, 18 year old Yana Zinkevych watched as her countrymen returned to little or no care, so she set about creating a local chapter of an ancient order of medics. Three years into the conflict, her organisation had grown from a handful of dedicated followers, to a battalion of veterans, but early one frosty winter morning, Yana’s life and work came to a crashing halt as she found herself lying in a ditch, with a car bearing down on top of her….

Invisible Battalion
Invisible Battalion consists of six stories of servicewomen told by three Ukrainian film directors: Iryna Tsilyk, Svitlana Lischynska and Alina Gorlova. The film’s protagonists are different by their life experience, age, military and civil professions, but all of them united by this war.

In 2016 a sociological survey on the war revealed a number of problems: Ukrainian legislation didn’t allow women to be assigned to combat positions, so they were enlisted as cooks, seamstresses, cleaners, accountants etc. while taking part in military combat operations as snipers, grenade launcher operators, reconnaissance soldiers, artillerists etc. This was done on semi-legal grounds. Thus, the majority of women who were at Donbas war were not enlisted officially and subsequently had no access to social or military benefits, military awards, social status, or career opportunities in the Armed Forces. The contribution of women to the defence of the country was and still is invisible to society. A powerful advocacy campaign for gender equality in the Armed Forces of Ukraine was initiated and thus the film was born.

This event will include an exclusive Q&A with the filmmakers about the journey behind the film.