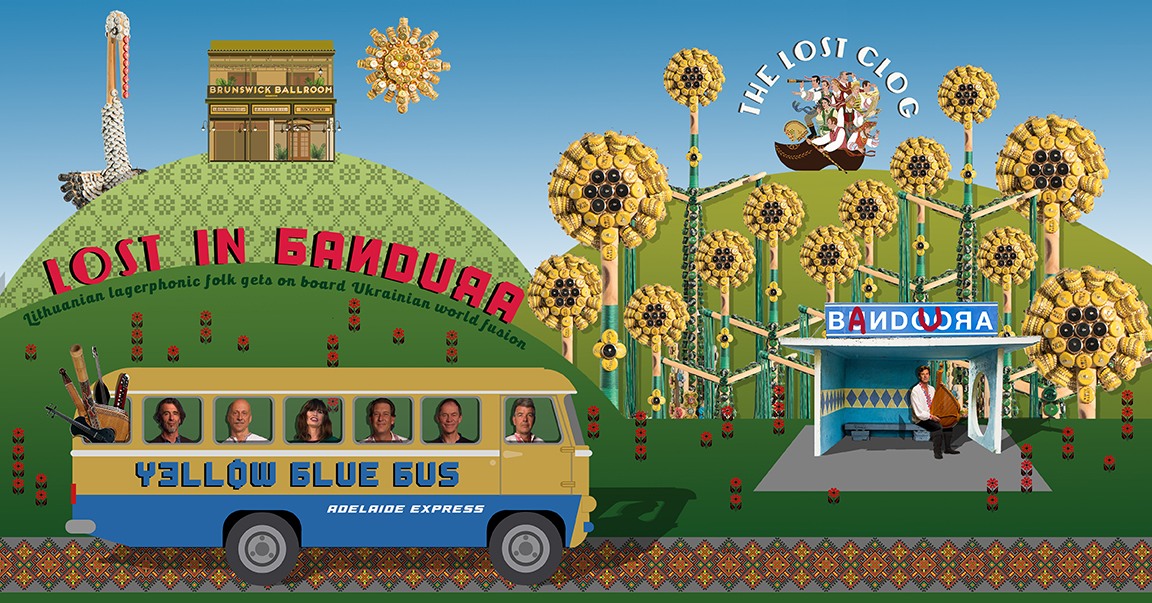 YELLOW BLUE BUS and THE LOST CLOG present: LOST IN BANDURA
Tickets: Online: $25 plus booking fee. At the door: $30 unless sold out. Under 16s free.
Doors/Kitchen open 1pm
Matinee Show 2pm
Melbourne-Lithuanian polyphonic pagans, The Lost Clog, are catching a ride with buoyant bandura balladeers, Adelaide-Ukrainian Yellow Blue Bus, promising an auditory journey that will get your vishyvanka vobbling. Combined, the two groups have performed at every major Australian folk festival, and won awards both locally and internationally.
Yellow Blue Bus is a global-fusion ensemble which highlights the beautiful sound of the Ukrainian bandura*, a unique 65 stringed cousin of the lute, which they bring into new musical territory in a contemporary and global context.
Layered onto the distinctive sound of the bandura are violin, guitar, mandolin and keyboard, with a solid rhythm section.
“They all play together beautifully with passion, skill and obvious respect and enjoyment of their task. It’s a true world fusion music effort” Steve Horne, Adelaide Independent News.
The Lost Clog is made up of the offspring of Lithuanian World War II refugees. They infuse centuries-old Lithuanian folk music with decades-old fashion and months-old facial hair.
Their ancient songs cover universal themes such as the joy of beer and the disappointment of marriage, beautiful lakes and inconvenient streams, drunken mosquitoes and inappropriate courtship, cannons that no longer fire and the euphoria of Grandma’s pancakes.
“…one of the finest musical experiences Spicks and Specks has ever had…” – Michelle Van Raay, Segment producer, SPICKS and Specks, ABC.
*not to be confused with the northern Melbourne suburb of Bundoora.