“Mr Jones” Film about the Holodomor 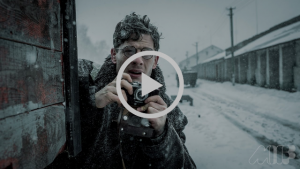 The Australian Federation of Ukrainian Organisations (AFUO) is proud to support two screenings of Mr Jones at the 2019 Polish Film Festival. Join us for this special collaboration between our two communities.

Veteran director Agnieszka Holland unearths an essential chapter of history with this biopic about Welsh journalist Gareth Jones and his efforts to expose the man-made famine in Ukraine during the 1930s.

Newly arrived in the USSR, continually told of Stalin’s achievements by Pulitzer Prize winner Walter Duranty but hearing whispers of widespread devastation in Ukraine, Jones became the first person to report on the Holodomor, the man-made famine that killed up to 10 million people. But his crucial coverage came at significant risk, as well as at a cost, to his safety, his reputation and his career.

As Jones – a contemporary of George Orwell, and widely considered an inspiration for Animal Farm – Happy Valley and Grantchester actor James Norton turns in a career-best performance. Also starring Peter Saarsgard and Vanessa Kirby, Mr Jones is a compelling and powerful film about a crusader determined to reveal the truth even in the face extreme danger.

“A fiery epic paying tribute to this forgotten figure of history … In its refutation of fake news, and its portrayal of a world that didn’t know if it would survive the rise of fascism and bolshevism, it rousingly speaks to our current global condition.” – Little White Lies