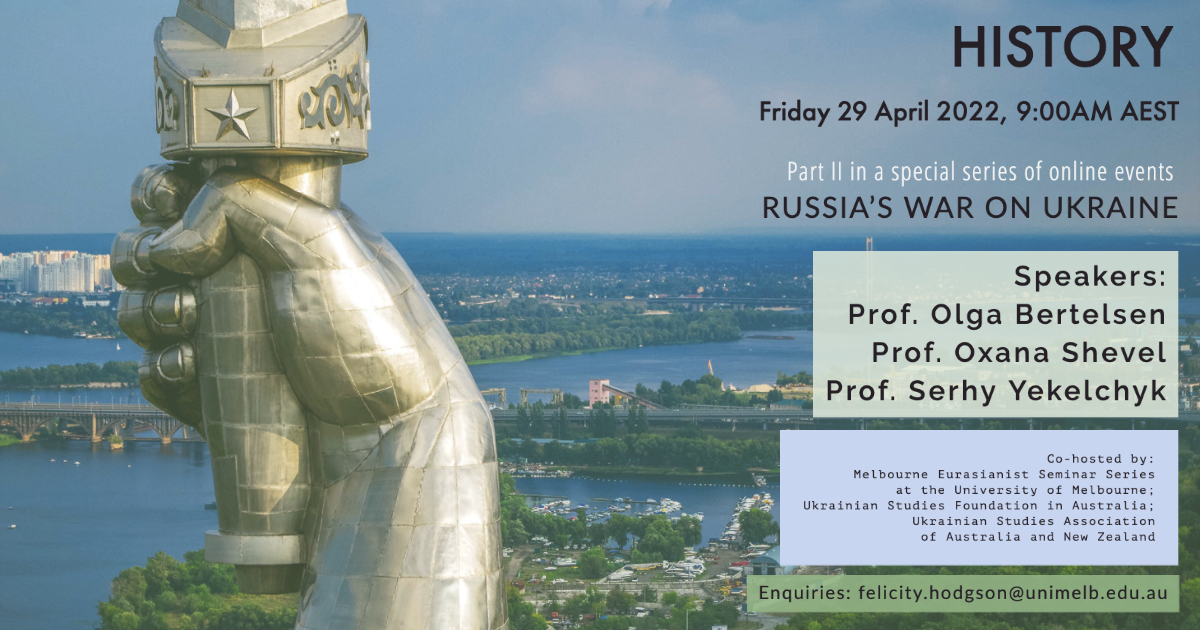 This session will feature:

This event will take place online via Zoom; all are welcome.

You can register for this event via this link.

Registration is free, but attendees who wish to support Ukraine may make a donation to one of the appeals endorsed by the Australian Federation of Ukrainian Organisations.

Olga Bertelsen is an Associate Professor of Global Security and Intelligence at Tiffin University’s School of Criminal Justice and Social Sciences (Homeland Security & Terrorism Program). Educated at the Medical State University (Ukraine), Bloomsburg University of Pennsylvania (the United States), Penn State University (the United States), and the University of Nottingham (the United Kingdom), she published widely on Soviet/Russian operations of ideological subversion, political violence in the USSR, and the methods and traditions of the Soviet/Russian secret police. She is the author of The House of Writers in Ukraine, the 1930s: Conceived, Lived, Perceived (2013), and the editor of three anthologies of archival KGB documents (2011; 2016) and two collections of scholarly essays entitled Revolution and War in Contemporary Ukraine (2017) and Russian Active Measures (2021). Her new book In the Labyrinth of the KGB (Lexington Books, 2022) focuses on KGB covert operations targeting Ukraine’s intelligentsia and the Ukrainian and Jewish diasporas.

Oxana Shevel is an Associate Professor of Political Science at Tufts University where her research and teaching focuses on Ukraine and the post-Soviet region. Her current research projects examine the sources of citizenship policies in the post-Communist states and religious politics in Ukraine. Her research interests also include comparative memory politics and the politics of nationalism and nation-building. She is the author of award-winning Migration, Refugee Policy, and State Building in Postcommunist Europe (Cambridge University Press, 2011), which examines how the politics of national identity and strategies of the UNHCR shape refugee admission policies in the post-Communist region. Shevel’s research appeared in a variety of journals, including Comparative Politics, Current History, East European Politics and Societies, Europe-Asia Studies, Geopolitics, Nationalities Papers, Post-Soviet Affairs, Political Science Quarterly, Slavic Review and in edited volumes. She is a member of PONARS Eurasia scholarly network, a country expert on Ukraine for Global Citizenship Observatory (GLOBALCIT), and an associate of the Harvard Ukrainian Research Institute and of the Davis Center for Russian and Eurasian Studies. She currently serves as President of the American Association for Ukrainian Studies (AAUS) and Vice President of the Association for the Study of Nationalities (ASN).

Born and educated in Ukraine when it was part of the Soviet Union, Serhy Yekelchyk received a Ph.D. from the University of Alberta. He is the author of seven books on modern Ukrainian history, Stalinism, and Russo-Ukrainian relations. His monograph, Stalin’s Citizens: Everyday Politics in the Wake of Total War (Oxford University Press, 2014) was the recipient of the Best Book Award from the American Association for Ukrainian Studies and its Ukrainian translation in 2019 received a special diploma of the Lviv Book Forum. Yekelchyk’s most recent publication is the second, much expanded edition of his popular book about the Euromaidan Revolution and the Russian aggression in Ukraine, Ukraine: What Everyone Needs to Know (Oxford University Press, 2020). A professor of History and Slavic Studies at the University of Victoria, Yekelchyk is current president of the Canadian Association for Ukrainian Studies.